Posted on December 10, 2010 by mikemeyerphotopro 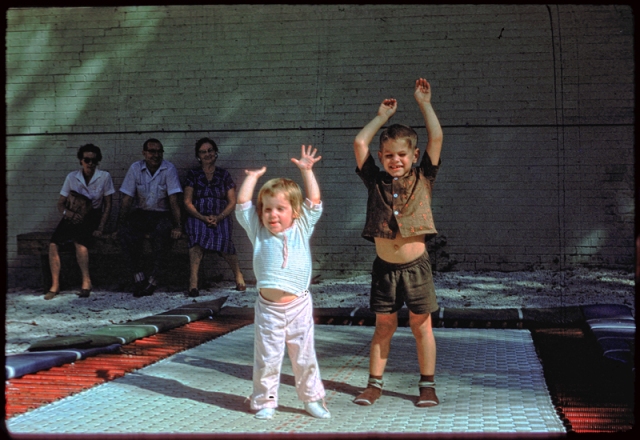 Hi gang, this here is a very old photo that I found a while back.  I believe it was taken in 1959 or 1960 on Kodachrome film. It’s not a really spectactular shot, maybe a cute shot of some kids on a trampoline.  Actually it’s my older sister and my cousin.  The folks in the background are from left to right, my grandmother, grandfather and great-grandmother.  Now what’s really amazing about this photo is that on the original slide you can’t see the people in the background and the kids jumping are very dark.  So how did I get so much detail out of this shot?  One word: HDR.  OK so maybe that’s actually three words.  Anyway I used a scanner to scan the slide at three different exposures.  Mostly going from normal to light and then I used Photoshop CS4 to Merge to HDR.  After converting to a 16bit image I used a little curves to get the exposure to where I wanted it and that was it.  Not too bad.  The image does need some color correction and a lot of dust removal but I wanted to show the effectiveness of using HDR to save old images.  Kodachrome has a ton of detail in it and can only be seen when projected on a screen or by using a loupe on a bright light table.  But now there is the option to save all your old slides by using this method.  I know it’s not a secret method or anything, I just wanted show how well it works.  So get out all those old slides and start scanning.

I've been photographing beautiful clouds and skies and landscapes for 35 years. So that's about all you'll see here. I hope you enjoy it as much as I do.
View all posts by mikemeyerphotopro →
This entry was posted in Uncategorized. Bookmark the permalink.