Posted on September 7, 2010 by mikemeyerphotopro 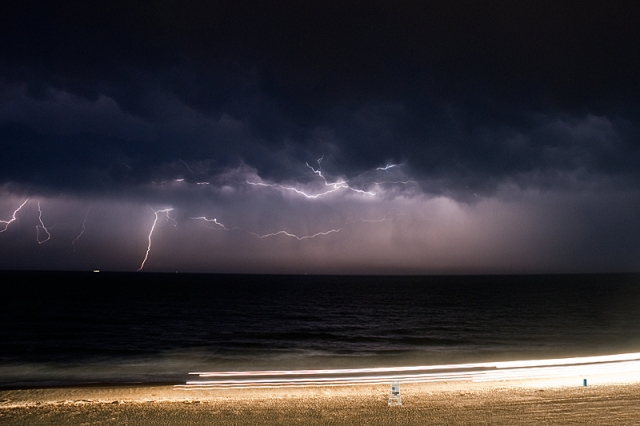 This is another shot from the same storm.  This time though the trash collection trucks were cruising along the beach.  So I picked up their headlights in my long exposure. I also noticed that there was one big bolt that touched down in the water off in the distance.  And if you look very closely you can see a boat on the water.  I can’t even imagine being in a boat as lightning is hitting the water around me.  That would be very scary.  The two bolts to the far left look as though they were trying to hit the water but then turned around and made a curly cue.  I checked the metadata on this exposure and it was 30 seconds at F5.6 with an ISO of 200.  So that would probably be a good starting point for anyone that would like to try to get some shots like these.  There were usually multiple discharges so they would require a shorter exposure that just one bolt of lightning.

I've been photographing beautiful clouds and skies and landscapes for 35 years. So that's about all you'll see here. I hope you enjoy it as much as I do.
View all posts by mikemeyerphotopro →
This entry was posted in Clouds, Lightning, Night Time. Bookmark the permalink.